In our latest interview, we have the privilege of talking to Astronomer Royal Professor Martin Rees, The Lord Rees of Ludlow, OM, FRS, FREng, FMedSci, FBA (Hon). The internationally renowned cosmologist and astrophysicist talks about how to successfully engage the public with science and gives us an insight into his latest book ‘On the Future: Prospects for Humanity’. 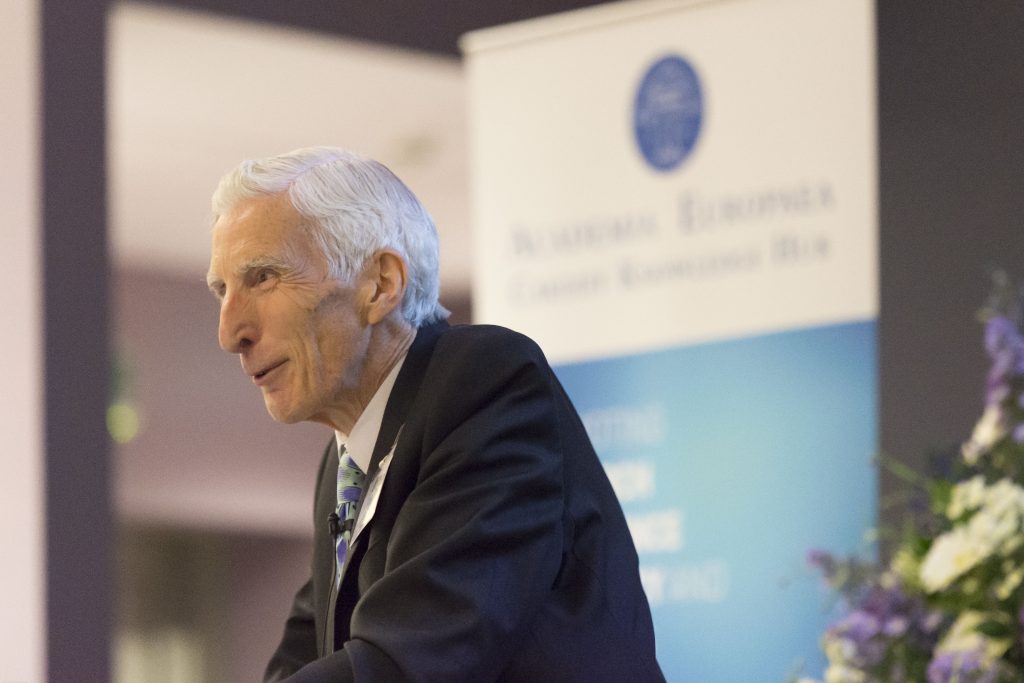 You are a prominent figure in science and the author of seven books of popular science. As an expert science communicator, your books are written in a way that the general public can relate to. Do you have any advice for researchers about how to successfully convey their research findings to the public?

“The world’s future depends on making wise choices about key societal challenges: energy, health, food, robotics, environment, space and so forth. These choices involve science. But these choices shouldn’t be made just by scientists. They matter to us all and should be the outcome of wide public debate. For that to happen, we all need enough ‘feel’ for the key ideas of science, and enough numeracy to assess hazards, probabilities, and risks, so as not to be bamboozled by experts or credulous of populist sloganising. Moreover, quite apart from their practical use, these ideas should be part of our common culture. More than that, science is the one culture that’s truly global: protons, proteins, and Pythagoras are the same from China to Peru. Science should transcend all barriers of nationality. And it should straddle all faiths too.  To grasp the key ideas isn’t so difficult. Most of us appreciate music even if we can’t compose it, or even perform it. Likewise, the key ideas of science can be accessed and enjoyed by almost everyone — if conveyed using nontechnical words and simple images. The technicalities may be daunting, but they can be left to the specialists. However, how science is applied concerns us all.

Findings and concerns need to inform planning and policy. So how is this best done? Direct ties forged with politicians and senior officials can help, and links with NGOs and the private sector too. But experts who’ve served as government advisors have often had frustratingly little influence. Politicians are, however, influenced by their inbox and by the press. Scientists can sometimes achieve more as ‘outsiders’ and activists, leveraging their message via widely read books, campaigning groups, blogging and journalism, or, albeit via a variety of perspective, through political activity.

If their voices are echoed and amplified by a wide public, and by the media, long-term global causes will rise on the political agenda. Iconic images can help: the polar bear on its melting ice-floe has had a long-term influence on attitudes to climate police, and more recently ‘Blue Planet 2’ pushed oceanic pollution up the agenda via the filming of an albatross returning from thousands of miles foraging in the Southern Ocean regurgitating plastic rather than the hoped-for nourishment.

A special obligation lies on those in academia or on self-employed entrepreneurs; they have more freedom to engage in public debate than those employed in government service or in industry. Academics, moreover, have the special opportunity to influence students. Polls show, unsurprisingly, that younger people, who expect to survive most of the century, are more engaged and anxious about long-term and global issues.”

You were elected to the Academia Europaea in 1989, a year after the Academia was established. You have said previously that Astronomy and space science are subjects where pan-European collaboration has been strong and effective. How do you see future collaboration?

“One of the most gratifying trends in the last few decades has been the rise in the whole spectrum of European science. When I was a postdoc, around 1970, I met my contemporaries from Germany, Italy and Holland because we all went for a spell in the US. Now, those who get PhDs from our Institute of Astronomy in Cambridge, a world leading centre, are more likely to do a postdoc in Germany, Holland or France, and there’s an equivalent flow in the other direction. In the ‘big sciences’ of astronomy and particle physics, the best facilities are now European, not American.

The European Organization for Nuclear Research has been the leading facility in particle physics for the last 20 years. In astronomy, the European Southern Observatory (another European Consortium) has the world’s best optical telescope — four 8 metre instruments linked together, and is building a next-generation telescope bigger than is planned in the US. And, in space technology, although NASA (National Aeronautics and Space Administration) had a much higher profile and bigger budget than ESA (European Space Agency), most of NASA’s effort goes on the manned programme — in science the two agencies are roughly level-pegging. Fortunately these international consortia are governed by separate conventions from the EU so won’t be unduly damaged by Brexit. There are some complications regarding ESA, because it has direct EU funding for some of its applied work, e.g. the ‘Galileo’ project – an improved GPS – which has security implications. And of course Brexit will be damaging insofar as it impedes freedom of movement, and makes the UK seem less welcoming, and less ‘plugged in’ to global academia.”

Your latest book is called ‘On the Future: Prospects for Humanity’. Could you summarise your greatest concerns highlighted in the book.

“Advances in technology have led to a world where most people enjoy a safer, longer, and more satisfying life than previous generations, and these positive trends could continue. On the other hand, environmental degradation, unchecked climate change, and unintended consequences of advanced technology are collaterals of these advances. A world with a higher population more demanding of energy and resources and more empowered by technology could trigger serious, even catastrophic, setbacks to our society. There’s an institutional failure to plan long-term, and plan globally.

Politicians look to their own voters and the next election. Stockholders expect a payoff in the short run. We downplay what’s happening even now in faraway countries. And we discount too heavily the problems we’ll leave for new generations. Without a broader perspective, without realizing that we’re all on this crowded world together, governments won’t properly prioritise projects that are long-term in a political perspective, even if a mere instant in the history of the planet. This is the first century, in the 45 million since our Earth formed, where one species — ours — can determine the planet’s future.

It would be a shaming contrast with our forebears if, despite our far greater knowledge and wider horizons, we persisted in short-term policies that denied future generations a fair inheritance. Our perspectives should be global and stretch at least a century ahead. Our responsibility to our children, to the poorest, and to preserve life’s diversity surely demands nothing less. Activists and experts by themselves can’t sustain political commitment to these long-term issues. Only if their voice is amplified by a wide public, and by the media, will long-term global causes rise high enough on the political agenda.”

How does an astronomer come to make predictions that are relevant to society?

“My own scientific field, cosmology, has a history of expanding horizons. We’ve had three ‘Copernican’ revolutions: the original  realisation that the Earth went round the Sun, not vice versa; then realising that our Sun was one of a hundred billion stars in our galaxy, the Milky Way; and then the discovery that there are billions of other galaxies, that have all emerged from a hot dense beginning, the ‘big bang’. We’re perhaps due for a fourth revolution: what we’ve traditionally called ‘the universe’, the aftermath of ‘our’ big bang, may be just one patch of space and time in a perhaps infinite archipelago. There may have been many big bangs, not just one. The patch of physical reality that we can observe could be as constricted, in relation to the whole, as the perspective of the Earth available to a plankton whose ‘universe’ is a spoonful of water. Odd though it may seem, some of the best-understood phenomena are far away in the cosmos.

Astronomers can convincingly attribute tiny vibrations in a gravitational wave detector to a ‘crash’ between two black holes more than a billion light years from Earth. In contrast, our grasp of some everyday matters that interest us all, diet and childcare for instance, is still so meagre that ‘expert’ advice changes from year to year.  When I was young, eggs and milk were proclaimed to be good for us, then they were thought bad; now we’ve come full circle. And there is still no cure for many of the commonest ailments. But it actually isn’t paradoxical that we’ve achieved confident understanding of arcane and remote cosmic phenomena while being flummoxed by everyday things. It’s because astronomy deals with phenomena far less complex than the biological and human sciences (even than ‘local’ environmental sciences). The smallest insect is more mysterious than a star or a galaxy. Fully understanding it must maybe await the emergence of a more intelligent species than ourselves.”

Read our series of interviews with Members of Academia Europaea connected with the Cardiff Knowledge Hub. Our members share their career highlights and their views on key issues in research.
Share this page:

Founded in 1988, Academia Europaea now has more than 5000 members, including more than 80 Nobel laureates. Our members are leading scientists and scholars who collectively promote excellence in research, learning and education in all fields of scholarship. Academia Europaea operates through a network of hubs across Europe. The Cardiff Hub opened in 2016 and is hosted by Cardiff University. Our purpose is to promote excellence in research and science advice, as enablers of effective policy development and progress in society.

A COLLABORATION BETWEEN THE ACADEMIA EUROPAEA AND CARDIFF UNIVERSITY